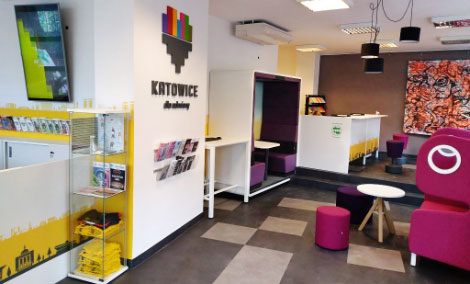 Opening hours:
Tuesday - Friday 10am to 6pm
Saturday, Sunday and holidays 11am to 3pm
monday closed 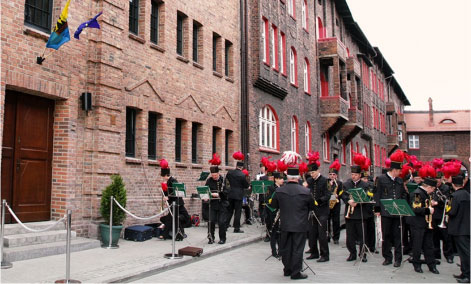 Electrical sockets
In Poland, we use European sockets. It’s worth checking how they look like. You may need an adapter.

Right-hand traffic
Traffic is on the right side here. Please remember that if you want to rent a car

Non-cash transactions in Poland
You can pay with a credit or debit card practically anywhere in Poland. You can also pay by phone, using NFC.

Prohibition
Partial (night) prohibition was introduced in Poland in 2018. Therefore, you won’t be able to buy alcohol after 10 p.m. in the shops in the city centre. The prohibition does not apply to restaurants and bars.

Polish-English
In Poland you can communicate in English without any problems. Almost every public place in Poland employs people who speak this language communicatively.

The train station is located on Marii i Lecha Kaczynskich Square. You can buy train tickets online and at train stations. Timetable available here.

Bus lines AP2 and AP3 provide access to Katowice from the Pyrzowice airport (Katowice Airport). The ticket entitles you to unlimited journeys on all bus and tram lines and regional trains within the metropolis for 24 hours.

https://citybybike.pl/
A very convenient and popular form of local transport is a city bike and scooters. Check the offer.

Free Wi-Fi network in Katowice is available in many places in the city centre (e.g. Market Square, main railway station).

Polish dishes not only taste great, but are also very energy-dense and warming. When you’re in Katowice, you should try at least some of them. We’ll tell you which of them are the best

Silesian roulade with potato dumplings and red cabbage
The roulade is a traditional Silesian dish usually served for a Sunday lunch. It’s pork or beef meat, wrapped around bacon, onion and pickled cucumber. The roulade is then stewed in sauce, with which Silesian dumplings are later served (i.e. small balls made of potatoes and flour with a recess in the middle). The dish is traditionally accompanied by red cabbage.
Żurek
Żurek is a traditional Silesian soup prepared on the basis of soured rye flour (akin to sourdough) in combination with a vegetable and bone stock, served with pieces of sausage, potatoes and other additions. Warming and nutritious.
Pierogi
Pierogi are traditional Polish dumplings. They are made with thinly rolled dough, cut into pieces. The dough is then used as a wrapper for meat, cabbage with mushrooms or something sweet to make the unique shape of pierogi. The dumplings are then cooked in boiling water and served with various sides.
Gołąbki (cabbage rolls)
Gołąbki are very popular in Poland. These are cooked cabbage leaves, stuffed with rice or groats and meat. They are served with tomato sauce.
Pork cutlet
This is a Polish variety of pork breaded cutlet – one of the oldest traditional dishes. It’s made of pounded pork tenderloin, seasoned and breaded, then fried. Cutlets are typically served with potatoes and salads.
Herring in oil with onions
Poles prepare herrings in many ways. However, the most popular is herring in oil with onions. You can eat it on its own or with bread. It’s a great match for more potent liquors.
Crepes
Crepes are very thin pancakes served with sweet cottage cheese, jam or fruit. You can choose what you want: cream, sugar or chocolate as the topping.

When going to Poland, remember two things. In Poland, tips are not added to the bill. You can decide whether to tip your servers. However, if the service was nice and the dishes tasty, it’s common to reward the team that worked on this carnal and spiritual pleasure.

If you want to buy a unique souvenir from Katowice, we recommend the following places:

I coal you
Coal jewellery

The capital of the Silesian region offers a wide range of goods for shoppers in its many shops and modern shopping centres. In Katowice, these attractive complexes are easy to reach and offer everything to meet the expectations of even the most demanding customers.

For those who enjoy shopping among historic buildings of the city centre, we recommend Katowice’s central district, enticing with its wide offer and professional service.